One of our favourite carp fishing venues is Broadland’s Fishery near Southampton. It is a special place for us because it’s where we won the British Carp Angling Championships back in 2012. There are loads of carp to have a go for, ranging from double figure carp right up to thirty pounders. It’s a smashing place with islands, gravel spots, silt beds, reeds and overhanging bushes. We couldn’t wait to get down there. A trip was arranged and although we were going to fish for the carp, we were also going to have a social on Saturday night with Pete and Debbie the owners of Broadland’s and Barry the fishery manager. Some of the lads who fish there were going to join us as well. They’re a great bunch at Broadland’s and they make you feel very welcome.

I arrived Friday morning. Ben would be joining me after work. 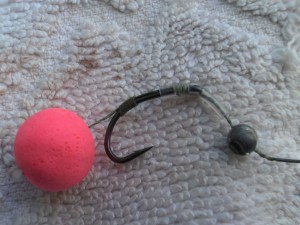 I set up in a swim I know has produced fish in past matches. I’d never fished this swim before but Ben has. Mainline Cell is my first choice of bait that I’d use anywhere, although I would be trying some New Grange and some pop ups throughout the session. My marker found a hole close to an island and I decided to put a Clockwork Orange pop up in it. My rig for this rod consisted of a six-inch sheath type hook-link tied to a size 6 Ashima C420 Anti Eject Hook. A safety clip with a three ounce flat pear lead attached completed the set up. The pop up was placed on the hair and a small shot was pinched on the hook-link as a counter weight to slowly sink the hook bait. 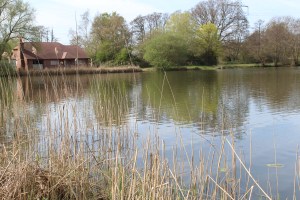 Before casting, I put a small web type PVA bag on the hook to stop the rig from tangling. The rig landed on the money on the first cast. Sometimes when you cast out, as its going through the air you just know its going to land on the spot. This was one of those times. Other times it can go wrong though. I put my second rig to my right next to an outlet. This was the same set up as the other rod but it had Cell bottom bait on the hair. After the hook-bait was cast to the spot a dozen or so Cell freebies were dropped around it. My third rod, again with the same set up but with a New Grange hook bait, was cast next to some lilies. I didn’t put any freebies around it but I did attach a small PVA web bag of chops to the hook.

Everything was in place so I sat back and took in the surroundings on what was a fine sunny day. The slight breeze was blowing into the corner where Ben was going to fish. I watched as a couple of carp showed their heads close to the reeds near Ben’s swim. At least he had fish in his swim. The peacefulness was soon shattered when my right hand buzzer sounded off. The rod was bent double. I picked the rod up and hung on as the carp tried to get into some reeds. After a few minutes I had control and the carp slipped into the net. It was an upper double Mirror. Good start I thought. A few more carp graced my unhooking mat before Ben arrived. I was actually playing one when he turned up. Everything was ready in his swim so it didn’t take him long to get going. It also didn’t take him long to catch his first fish either, a nice low twenty Mirror. Ben had found a gravel spot in front of him at a depth of four feet. He spoded some Pure Particle Spod-mix and chopped Mainline Cell boilies on it and fished over it with a cell boilie. He also placed a bait next to some lilies and another next to some reeds. These had Clockwork Orange pop ups on.

By Saturday afternoon we had caught steadily on what was a chill out session for us. Later that afternoon we reeled in and went to watch the football in the bar. 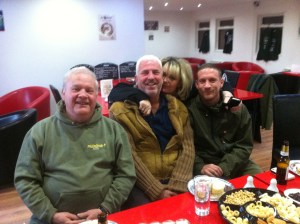 Pete, Debbie, Barry and his wife and a few others joined us. Pete and Deb brought some nibbles with them which went down well. We had a really nice enjoyable social evening amongst good friends. It wasn’t too late when we retired to our bivvies a bit worse for wear. We didn’t bother casting out until the morning. The catching continued and we had a nice brace of twenties to round off the session. The tactics we’d chosen had obviously been the right tactics. Our final tally was 22 fish which included six twenty’s. Broadland’s is truly a great venue for pleasure angling and carp matches. Carp can be caught from every swim. We had a great session and a wicked social with our friends at Broadland’s and can’t wait to do it again. Our thanks go to Pete and Debbie for inviting us.

Broadland’s is a prolific day ticket water so you can just turn up on the day you want to fish. If you want more info then contact Broadland’s on 02380 869881 or email them at Broadlands.lakes@hotmail.com. See you there.

A Social on Broadlands by Barry Occonor

Just a couple for Val
John with his 28.7lb from the weekend